You are here: Home / Paper on Currency Redenomination and Balance Sheet Effects Associated with...

The renewed tension in Greece in 2015 has again ignited the debate about EUR breakup, and the process of redenomination. As a follow on to the Wolfson Economics Prize Paper, I have written an academic paper on the topic. It is available here EurBreakUpCostBenefit.

Since it is pretty lengthy, a summary of its parts may be handy:

In section 3, I discuss the various types of breakup of the Eurozone, differentiating between a partial breakup (where the Euro lives on in some form) and a full-blown breakup (where the Euro seizes to exist altogether). A key insight is that in a partial breakup, the governing law and jurisdiction of financial contracts are crucial to whether an instrument can redenominate into new local currency, or whether it will stay in Euro.

In section 4, I analyze the most important classes (from cash to derivatives) of financial instrument one by one, in order to pinpoint how each type of instrument would behave in a Eurozone exit scenario. I classify instrument according to whether they are local law category, foreign law category, or hybrid category (bonds can be either local law or foreign law).
In section 5, I map the insights at the micro/contract level into the line items of the international investment position. This allows macroeconomic analysis of balance sheet effects following Eurozone exit. The end result is a simple formula defining the relevant external exposures at the macro level. I.e. the exposures which behave as foreign currency liabilities after exit and have potential to generate negative balance sheet effects as a result of depreciation of the new local currency.

In section 6, I present a method for calculating the proportion of local and foreign law exposures of the bond exposures (which are hybrid in nature in terms of governing law/jurisdiction). The end result is a database of relevant external liabilities for 11 major Eurozone countries (the main countries featured in the debate). Information of this nature has previously been unavailable since official sources entirely ignore the legal dimensions of countries’ external exposures.

In section 7, I illustrate how the basic method of analysis and the empirical estimates of relevant exposures can be used to quantify balance sheet effects associated with exit from the Eurozone for Spain and Italy. 10 I also show that the relevant external exposures are generally very large relative. In particular, I compare the exposures to those in place in emerging markets ahead of currency crises over the last 20 years. This comparison suggests that the economic impact of the balance sheet effect could be even bigger than has been observed in emerging markets historically for some Eurozone countries.

Section 8 concludes, highlighting the importance of incorporating quantitative estimates of balance sheet effects in a comprehensive cost-benefit analysis of exit from the Eurozone. 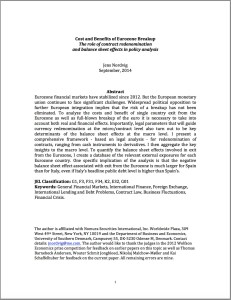